Today I am going to share you an extremely wild story about how I automated taking a screenshot of every single Pokémon in game!

The journey starts with a problem of not having every Pokémon in game. I mean.. Who does?

First step was of course to get renders of all Pokémons.. Shouldn’t be too hard, right? Just manipulate, or more precisely.. Man in the middle the connection between my phone and the server, fake that the server sent every Pokémon in game and.. there we go, right?

After quick research I found this implementation in GitHub called Pokemon Go MITM Proxy by a nickname rastapasta, so I tried to setup it in Windows environment.. No luck.. obviously.. Its also documented in the repo that its hard to compile..

After recovering from the disappointment I cloned the repo on my Linux server and ran it there, installation went smoothly and I was ready to go!

Unfortunately there’s still need for root or removal of certificate pinning, but gladly from my last post I had a patch ready to go! So no worries! I installed the certificate as documented from the server and ran an example script that would replace all my pokémons, and I was good to go! 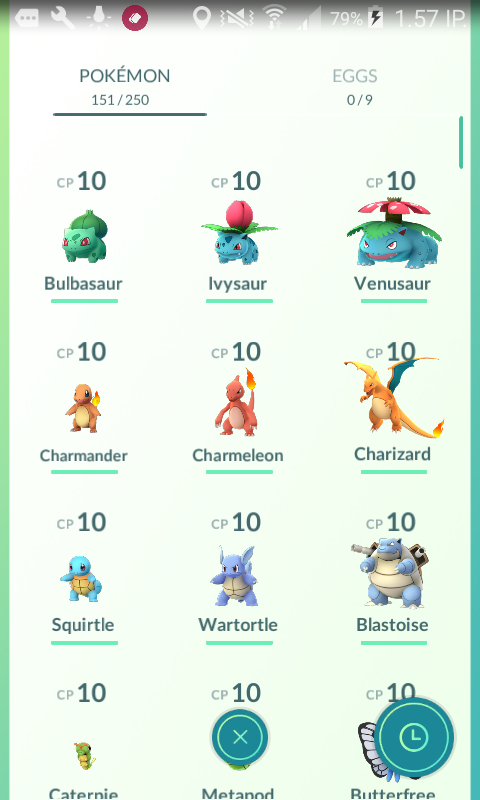 When I ran Pokémon Go after this, I ended up getting a list like  this, however it wasn’t enough.. The example would only replace the Pokémons I had with others, but what I really needed is it to clear my Pokémons and add all Pokémons in increasing ids..

So its time to edit the script.. So I opened example.replacePokemons.coffee but coffeescript wasn’t too familiar with me.. Nor was the structure of packets, so first of all I had to lookup coffeescripts syntax before anything. It wasn’t too bad knowing Javascript, but required some effort to get through, but I found also this js2coffee compiler online I could use when stuck.

So the smallest modification I could get through with is remove all the code touching the pokemons, and craft a piece of code that replaces whole inventory with inventory cotaining an item with PlayerStats and all available Pokémons.

As funny as it sounds, PlayerStast too are passed as an InventoryItem.. Smart..

The minimal implementation I was left with is as follows:

I am not even sure if all of this is required.. But its pretty straightforward.. Replace inventory_items with array containing just PlayerStats, then add 151 Pokemons with ids 1-151 and be fone with it!

The end result is.. well the same as the previous as I was too lazy to run the initial version of replacePokemons to get the real initial result sooo.. Now we’re left with just taking a screenshot of every Pokémon.. Should be easy.. right!

For our good you can scroll the list of Pokémons by swiping so capturing screenshot should be easy as taking screenshot with Pokémon id as name, then swipe predefined amount, sleep 10 seconds to let the model load, and repeat!

A little Windows shell script I made is as follows:

After running this for.. let me calculate.. approx 30 minutes.. we’re done, and have a folder full of images!

As you can see, we’re good, and as far as this glimpse tells me.. we did fine! Now its time to get on with these pictures.. but that’s a topic for another blog.. Thanks for reading!

Last time I posted about patching Pokemon Go without touching the native side, posted it on reddit and gained some good upvotes in /r/pokemongodev, and initial thought in the post was, should this be automated, and given the popularity, I’d say hell yeah!

That’s what I have been up for previous couple of days, writing a fool proof command line based application that lets users patch APK’s with any set of changes, currently it only supports complete file replacements or additions, but that’s easily expandable if required.

The basic task the tool was geared towards is to use APK Tool, as runnable Jar to unpack the APK, then apply some kind of patches to the unpacked folder and repack, sign and align it.

Requirements of running the tool is to have Android SDK, APK Tool and a JDK Installation, which are pretty common, if you’re into this kind of stuff!

The setup is quite simple, when you run the released jar from command line, the program looks for ANDROID_HOME environment variable, JVM parameter and the configuration file, created after the first run to see if its been set, and if it hasn’t it asks user to input it.

ANDROID_HOME here is the root folder of Android SDK, which could automatically be detected to some extent, but as I have other things to do.. for now.. It just looks for the environment variable and command line flag.. You can see where Android SDK is located from Android studio, but at least in Windows environment its usually located in

Aftere setting up ANDROID_HOME, we’re not done yet.. The next thing to set is path to APK Tool.jar which can be downloaded from here. Just place it anywhere and copy the path to the jar and paste it in.. after that is the final step, before getting to the real deal! The most important part, which hopefully you’ve already set! Setting JAVA_HOME environment variable or just inputting it..

As written in the first Google result, If you didn’t change the path during installation, it will be something like this: C:\Program Files\Java\jdk1.8.0_65

And that is the final step before getting into the tool, after that you will be asked for build tools version you’d like to use, if you’ve got multiple.

For example here’s only one apk, which is the pokemon go, as used in this example, so we select 0.

These are the two directories inside the /patches folder, which contains the following structure:

You can toggle the patches by their version number, for example, here we want to apply remove pinning patch, we just input 1, and after that we can press enter to proceed with patching.

After that we’ll see a long output of information of whats happening, but after its all done, we’ll see output file

which is result of debuilding, patching, rebuilding, signing and aligning, which is ready to be installed on an Android device! Simply run

And enjoy your Pokemon Go without certificate pinning!

Thanks for reading and for those interested, be sure to see the project in GitHub!